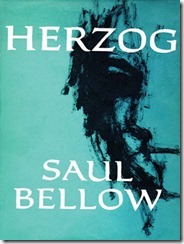 His wife convinced him to buy a house in Chicago; then tried to have him committed; then, left him for his best friend. On top of that, he is denied contact with either of his children.

Moses sets out for Chicago with his later father's antique pistol, 2 bullets, and murder on his mind. But nothing goes right, and his plans fall apart, and he is in an automobile accident and the police discover his loaded pistols.

The action does of Saul Bellow's Herzog does not happen until the novel is at least half over. But the author keeps us engaged through Moses's angst, as his life falls apart. Moses deals with his depression by writing letters - most of which are never sent and many of which are addressed to famous people such as Friedrich Nietzsche and (then-President) Dwight Eisenhower.

Herzog is unstable; but he is not crazy as his shrewish wife asserts. And his letter-writing decreases as he comes to terms with the cards he is dealt.

Bellow's writing is poignant and sad, but sometimes humorous, with lines such as

"Lead me into Penn Station"
and
"Will never understand what women want. What do they want? They eat green salad and drink human blood."

This book will appeal to anyone who has experienced the helplessness of a mid-life crisis; or the pain of betrayal; or the paralysis of uncertainty.