"Hillbilly Elegy: A Memoir of a Family and Culture in Crisis" by J.D. Vance 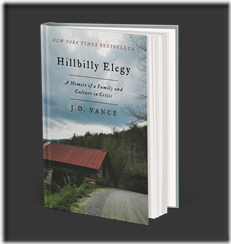 J.D. Vance was never a hillbilly. He isn't even from the hills. He was raised in the southwest Ohio city of Middletown - a rust belt town hit hard economically when a major employer left.

But his family migrated to Middletown from rural Kentucky and displays many of the attributes of the white working class of Appalachia. These people, Vance tells us, identify as "hillbillies". And in Hillbilly Elegy: A Memoir of a Family and Culture in Crisis, Vance describes the attributes of these hillbillies - sometimes through the stories of his own family and neighbors and sometimes through statistics drawn from studies and journals.

Most of those traits are not good. The undereducated, underemployed whites with roots in Appalachia (read "hillbillies) are verbally abusive and prone to violence and share a feeling of hopelessness. They tend to believe that they are not in control of their destiny - that those who succeed were born to better circumstances or were just born smarter. To make matters worse, hillbillies are often dishonest with themselves. They are convinced that they work harder than they actually do and that they attend church more often than they really do. They distrust outsiders; they distrust the government; they distrust the press. These factors combine to keep them poor and exclude them from the American Dream.

They do profess a fierce family loyalty, but only in the sense that they will attack any outsider who insults or otherwise threatens their family. They are generally not supportive of their own family and are often treat one another with cruelty.

Hillbilly Elegy tells Vance's story of being raised by these folks, the effect it had on him and others like him, and how he was able to escape this culture and graduate from a prestigious law school.

Vance's mother was a drug-addicted single mother, who marched through a plethora of boyfriends and husbands as he was growing up. He nearly flunked out of high school while growing up and many of his friends and neighbors got into trouble and/or made nothing of their lives.

He was largely raised by his gun-toting, foul-mouthed grandmother (aka "Mamaw") and his grandfather (aka "Papaw").

Eventually, Vance graduated high school, enlisted in the US Marine Corps, earned a bachelor’s degree and a Yale law degree.

Mamaw succeeded in instilling in him a willingness to work hard and improve himself.

He enlisted in the US Marines right after high school, where he learned discipline and many of the life skills not taught to him growing up.

He was accepted into Yale, where he learned the art of networking to achieve success.

Hillbilly Elegy is an interesting story, about a man who overcome adversity by taking control of his life and rejecting his circumstances.

But is also a social study of an American demographic that is often overlooked - the poor, white working class of Appalachia. These are people whose lifestyle is not well suited to adapting as the economy changed and felt left behind by the rest of America. This feeling of hopelessness may explain why so many of them shifted from the Democratic to the Republican party in less than a generation.

I cannot speak to the generalizations that Vance makes about his people. My ten years living in Kentucky were mostly not spent among the very poor. But I don't doubt his personal experiences and how he was able to overcome his own expectations and his perceived destiny. And I appreciate that he made me think about a group of people in a new light.