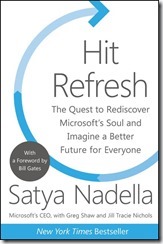 Satya Nadella became the third CEO of Microsoft in 2014 - a few months after I joined the company. There is no denying the impact he has had on Microsoft and on the tech industry since rising to CEO. He has changed the corporate culture significantly. Microsoft is more open and more agile today than it was 4 years ago.

In Hit Refresh, Nadella describes what he planned to do as leader of Microsoft, what has happened during his tenure as CEO, and his plans for the future of the company.

He begins with a short description of his life - growing up in India, moving around, his growing fascination with computers; he follows with a description of his early years at Microsoft, rising first to lead the cloud computing team; then to CEO.

But only a small part of this book is devoted to an autobiography. Mostly, this is a biography of Microsoft - the company where Nadella has spent nearly all of his adult life - and of the tech industry.

Nadella describes his vision for the future of Microsoft. He talks about its technology future (he sees AI and Mixed Reality as technologies poised to grow); about its business environment (Microsoft often partners with competitors when it makes sense for both parties), and about its ethical decisions (he discusses the importance of privacy to a global company and when it is time to fight for it).

Not all that Nadella writes is self-congratulatory. He talks about mistakes the company has made, such as the ill-fated Nokia acquisition; and mistakes he has personally made, as when he gave a poor answer to a question about women seeking equal consideration for a promotion.

Although Hit Refresh provides some answers, it raises even more questions about the future of Microsoft and the global tech industry. We are in a period of great transition and Nadella does not pretend to have all the answers. But his message is clear: Microsoft and its employees must embrace a growth mindset in order to achieve the goal of empowering everyone to achieve more.