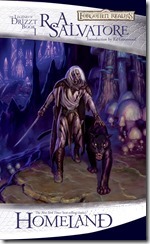 Drizzt Do'Urden was born into the underworld of Mgnzoberranzan, home of The Drow or Dark Elves. The city is ruled by the tyrannical Matrons, who worship the malevolent spider god Lolth. Theirs is a world in which violence and treachery are praised and rewarded, while empathy and sympathy are perceived as weaknesses to be severely punished. Mgnzoberranzan is divided into Great Houses, that often clash violently with one another to improve their standing within this city's hierarchy.

Drizzt is the most gifted warrior of his people. He is trained by the great Weapon Master Zaknafein and he surpasses all his classmates at the Academy.

But Drizzt is unlucky enough to be born with a conscience in this sadistic, society. He questions the ethics of the Menzoberranzan society and their worship of the malevolent spider-god Lolth.

Drizzt joins in the drow attacks against his people's enemies. His fighting prowess increases his reputation, but he begins to see that his family and people have been dishonest about the character and motivations of their enemies.

Homeland is the first book in R. A. Salvatore's Dark Elf Trilogy, which is chronologically the first trilogy of his Legend of Drizzt series. These series and many of Salvatore's other books take place in the Forgotten Realms universe, made popular by the Dungeons and Dragons fantasy role-playing game.

The novel is an adventure story and Drizzt is never certain who (if anyone) is his ally. He hopes, but does not know if he can count on Zaknafein and the pan-dimensional panther Guenhwyvar as allies. Each of the great houses uses deception to plot against rival houses in their quest for revenge and power in this dysfunctional world.

Homeland explores the conflict between personal principles and our natural desire to belong to a family and social order. Drizzt's conflicts are extreme (he is good, and his family and people are evil), but we all suffer this same internal battle at times.

The characters don't have a lot of depth and the writing is a bit heavy handed at times. But the story is good fun. And I enjoyed it.