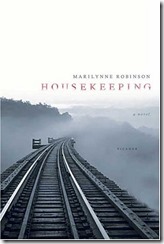 It opens with a train crash into a lake, killing hundreds, including the grandfather of Ruthie and Lucille. Later, Lucille and Ruthie's mother commits suicide by driving her car into the same lake. Abandoned years earlier by their father, the girls grow up under the care of their grandmother and aunts until eccentric Aunt Silvie shows up and moves in.

Silvie is a former transient, who sometimes falls asleep on park benches. She is not cut out for motherhood and the girls withdraw into one another, skipping schools and making no friends, other than one another. They skip school and the local authorities begin to question their situation, forcing everyone in this family to make a choice.

Housekeeping is a simple story, built on the strength of the characters. Robinson presents humor and tragedy in an eloquent style that keeps the reader engaged. For such a short novel, we see a full picture of the three main characters. It is worth the time to read.