How The SteelDrivers Turned Me Into a Steelhead 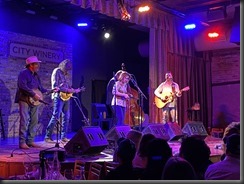 Sometimes the loss of a major talent destroys a band; and sometimes, that band keeps moving forward and continues producing excellent material. The SteelDrivers experienced the latter.

In 2010, founding member Chris Stapleton left the group and went on to a successful solo career. The band has had three lead singers since then, but the lineup has remained relatively stable otherwise and has earned multiple Grammy nominations and one Grammy Award. Current singer Matt Dame has the voice to drive forward the band's music.

Thursday night, The SteelDrivers performed at The City Winery, delighting the crowd with their songs and their energy.

Rogers took the reins of this show, introducing the songs and charming the audience with humorous stories. The show was scheduled as part of a tour that should have happened two years ago to promote their "Bad for You" album. That album was released a few weeks before a global pandemic shut down much of the world, including the SteelDrivers tour. Rogers informed us that SteelDrivers fans are known as "Steelheads" and she hoped we would all leave as Steelheads tonight.

The band takes pride in performing only their own songs, steering clear of covering other songwriters' material; and they have an impressive list of songs on their five albums from which to choose. By their own admission, the songs tend to be autobiographical, but they leave it to the audience to decide what is fact and what is fiction.

They play bluegrass music, but it is bluegrass with a mix of blues and country - a good combination that empowered the music.

The band sounded better and better as the night went on. The audience drew spirit from the band and the band from the audience. Highlights included the emotional "Ghosts of Mississippi", the traditional country song "Lonely and Being Along", and "Blue Side of the Mountain" - a song recently covered by a contestant on American Idol. They returned for one encore: "Where Rainbows Never Die", a fan favourite.

I was a casual fan at the start of the evening. By the end of the concert, I was a Steelhead.