"I Am Malala" by Malala Yousafzai 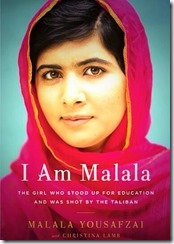 It was October 9, 2012, just after noon. A group of Taliban terrorists boarded a bus in Swat District, Pakistan and shot 15-year-old Malala Yousafzai in the head. They targeted her for pursuing an education for herself and for promoting education for women - something The Taliban insist is forbidden by the Quran. They left her for dead.

But Malala did not die. Thanks to emergency medical attention in Pakistan, and further treatment in the UK, she survived to become an international advocate for female and youth education. Two years later, she was awarded the Nobel Peace Prize (the youngest Nobel recipient in history), and she wrote I Am Malala: The Story of the Girl Who Stood Up for Education and Was Shot by the Taliban - a book chronicling her story.

Malala describes her home province as a beautiful landscape that serves as a vacation destination for many Pakistanis; but it is also a battleground between the Pakistani army and the Taliban - a fundamentalist terrorist organization that seeks power for itself and strict adherence to Muslim law. They strive to achieve these goals through violence and intimidation.

Malala's story starts long before the attack on the bus. Her father Ziauddin ran the school that his daughter attended. He was progressive enough to allow girls into his school and generous enough to allow some of the poorer students to stay and eat at the family's home. Ziauddin was an outspoken proponent of education for all, which hid not endear him to groups like the Taliban. At a young age, Malala herself began writing an anonymous blog, promoting the right to education for all.

The book's writing style reminds us that Malala is still a school girl; but the message is a powerful, adult one: A young girl's courage to stand up to terrorism, violence, and oppression can inspire us all.

I became aware of Malala shortly after her recovery from the assassination attempt, when she began speaking publicly and meeting with international officials, such as Barack Obama and Queen Elizabeth. But I was unaware that she had been fighting for these things for most of her life. She was awarded Pakistan’s first National Peace Award for Youth at the age of 14 - an award that now bears her name.

She grew up during a turbulent time in northern Pakistan. National politicians largely ignored the remote region, except during elections. Political power in the district was concentrated among a few families. Drone attacks from the U.S. in the area and suspicion of U.S. spies led to a general distrust of America by the locals. The U.S. Military discovered Al-Qaeda leader Osama Bin Laden hiding in a compound a few miles from Malala's home and killed him during a raid. The Pakistani military did not assert its full power to maintain the safety of the citizens. All these factors allowed the Taliban to gain influence in the area and eventually assert control at least as strong as the Pakistani military. The Taliban arrived when Malala was 10 years old. They steadily increased their power in the region by recruiting the disenfranchised and by terrorizing any who disagreed with their interpretation of Islam.

I am Malala was co-written by British journalist Christina Lamb, but it still retains the voice of a teenage girl, concerned with her friends and her clothes and arguing with her brothers; but also recognizing the importance of what she and her father are doing. And having the courage to voice that importance. Malala Yousafzai miraculously survived an assassination attempt at point-blank range; and she seized the opportunity to spread her message throughout the world. This book is part of that.