I Have Never Seen Anything Like a Howie Day Concert 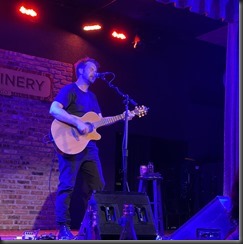 Howie Day has a beautiful voice, is an accomplished guitar player, and has written dozens of great songs. For many, that would be enough. But Day takes it a step further in his concerts.

Thursday night at City Winery, Day appeared on stage with only a guitar and a few switches at his feet. Frequently, he would record his voice or his guitar playing or the sound of him tapping on the exterior of his instrument; then, play back these recordings on a loop to create rich layers of music. At times, he would enhance the playback with a bit of reverb. We heard musical arrangements and harmony vocals as if he were not alone on stage.

Between songs, Howie chatted casually with the audience about his life and his music. He introduced the song "Disco" by telling us he recorded it in his parents' basement "which sounds sad, but I was seventeen at the time". He sang an alternate country music version of his song "Be There", entitled "Beer There", complete with a southern twang.

Highlights included "Be There", "Tree Tops", "Longest Night", and his biggest hit "Collide". Nearly every song was an original, but he mixed in U2's "One" and opened his encore set with Crowded House's "Don't Dream It's Over".

It was a show filled with more energy than one would expect from a singer/songwriter who specializes in ballads and love songs.

I have never seen anything quite like a Howie Day performance. I have seen many musicians backed by drum machines or pre-recorded instruments and I have even seen a few record a brief snippet before playing on loop as their own accompaniment; but I have never seen a musician layer so many levels of music simultaneously and create such a rich sound as I witnessed Thursday evening.