"I, Robot" by Isaac Asimov

These are the 3 laws of robotics. They are built into the core technology of a robot's positronic brain and no robot may violate them. All robotic technology is built on top of these laws, ensuring that robots will be safe.

In the 1940s, Isaac Asimov wrote a series of stories speculating on the future evolution of robots and, in 1950, he compiled them into a single volume titled I, Robot. Although only loosely connected, most of the stories include Dr. Susan Calvin, a  Robopsychologist at U.S. Robotics, the only company able to manufacture these machines. 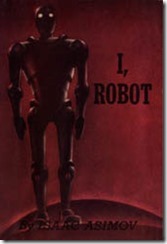 Many of the stories in this book revolve around the 3 laws - particularly exploring what happens when the laws come into conflict or when an ambiguous situation makes it difficult for a robot to interpret and apply the laws. The greater the conflict, the more stress placed on a positronic brain, which is why robots need a psychologist and humans need Susan Calvin to help them understand robots.

These stories launched a series of very good Robot novels for Asimov, who eventually tied the universe in which his robots existed into his Empire and Foundation series. Asimov's robots and the Robotics Laws influenced many other books and movies featuring mechanical men; and even influenced the real world field of robotics, as his three laws are often brought up when discussing the ethics of the technology. In fact, the term "robotics" was invented by Asimov and first appeared in a story in this collection.

I, Robot succeeds because it is based on plausible scientific principles and because it raises questions that science would be likely to encounter as it advances. There are no strong characters throughout the series (Calvin is a minor character in most of them), but the story and the ethical questions carry them along well.

My favourite story is "Liar", which is about a robot that gains the ability to read minds and uses this power to do what he believes will bring no harm to humans. It is a parable of the result of good intentions wrongly applied.

I, Robot is a reminder that advancing technology brings with it ethical choices and questions. Any fan of science fiction will enjoy it.