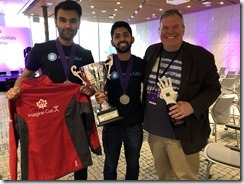 The Canadian Imagine Cup Finals took place in Vancouver, BC. Six finalists competed for the right to advance to the International Finals in Redmond in July.

This event was smaller and shorter than the corresponding US event; but equal in energy. Every one of the teams showed great creativity, strong technical skills, and impressive presentations.

I was excited that all 6 finalists came from schools with which I work. First place went to SmartArm - a project that provides affordable prosthetic arms for amputees - a team I helped mentor at the UTHacks hackathon in January in Toronto.

I'm getting used to these Imagine Cup projects and competitions and I'm looking forward to the world finals.