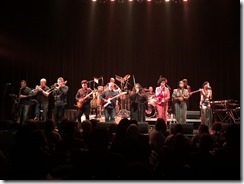 I wasn't familiar with Incognito, the acid jazz band formed in the early 80's in the UK; but my friend Thad was a big fan.  He called to suggest we see them at Park West Thursday evening, so I listened to a couple of their albums and I was sold.

Their live performance did not disappoint. Incognito founder Jean-Paul "Bluey" Maunick has assembled a talented group of musicians from all over the world (UK, Jamaica, Trinidad-Tobago, China, Italy, US) and they played and sang a set of tight arrangements that delighted a nearly full concert hall.

Bluey brought a long 4 singers. All were excellent, but the featured singer was Maysa Leak (aka "Maysa"), who has carved out a solo career for herself and impressed with both her range and her emotion. 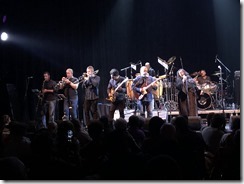 Highlights of the night included a cover of Ronnie Laws's "Always There" (Thad's favourite song), "Deep Waters", which featured a medley of love songs, and a long jam on their penultimate song that featured an excellent solo by every member of the 9-piece band.

Incognito did not come back for an encore, but it felt like enough. Everyone felt the energy, and everyone left satisfied.