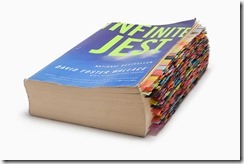 Infinite Jest by David Foster Wallace takes place in the near future - mostly in and around Boston, MA.

Things are a bit different in the future.

Calendar years are no longer referred to by ordinal numbers; instead, the naming rights to each year is auctioned off to commercial products. Years now go by names such as "Year of the Perdue Wonderchicken", "The Year of the Trial Size Dove Bar", and "Year of the Tucks Medicated Pad". Most of the story takes place during the "The Year of the Depend Adult Undergarment".

After contaminating the entire northeastern part of the United States, the US has coerced Canada into annexing the polluted region and using it as an international toxic waste dump. This region is known as "The Great Concavity", probably because of its shape, but possibly because of the frequency of babies born missing a skull.

Canada, Mexico, and the US are now part of a larger nation, known as the Organization of North American Nations, aka "ONAN", which may or may not be a reference to the Bible's most famous masturbator.

The novel follows dozens of characters and multiple story lines. Some are in a private Massachusetts high school that focuses on educating elite tennis players; others are in a nearby drug and alcohol rehabilitation center; still others are involved in international intrigue, espionage, and terrorism.

There is no shortage of quirky characters in Wallace's novel. Most are neurotic and some border on psychotic. Characters are damaged in a variety of ways, from being abused as children to the suicide of loved ones to drug addiction. One beautiful girl had acid thrown in her face by her mother, who was aiming for her philandering father.

They all search for happiness, but not seem to find it.

It's a difficult book to follow for the following reasons

-It is extremely long, has many characters, and many subplots

Some of the storylines came together; but many did not (or, if they did, I didn't see it). And that frustrated me.

Having said that, I did enjoy Wallace's writing and the characters he created and the imagination he put into individual scenes. But I failed to see the overall arc of the novel.

I'm tempted to read this book again to catch what I missed, but the 1000+ pages makes that a daunting task.