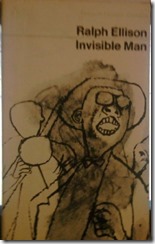 The unnamed African-American narrator of Invisible Man by Ralph Ellison recounts his life, growing up in the south; attending, then being expelled from a traditionally black college; emigrating to Harlem and taking up a group calling themselves "The Brotherhood", from which he ultimately separates. He does his best to assimilate with those he meets, repeatedly ceding his own ideas and identity; but it ends up for naught as he becomes more and more "invisible".

After discovering the narrator rescuing an evicted tenant from an angry mob, The Brotherhood recognizes his talent for persuasive speech and for mobilizing a crowd and he soon becomes the voice of this organization in Harlem. We are never given a clear picture of what The Brotherhood stands for. They support vague statements, such as "equality" and "the woman issue", but we know nothing of their details for achieving these goals. They may represent the Communist party, with which Ellison had a brief relationship. But they consolidate their power by manipulating others, including the black community of Harlem. When it suits their needs, they turn on the narrator and reverse their commitment to the local black community.

The Narrator loses ground every time he tries to assert his own opinions and his own characters. This leads him to label himself "invisible".  He is punished every time he asserts himself. When he acquiesces to those around him, he achieves temporary success, but he cannot maintain this success, as those in power shift their goals and expectations.

The book is filled with bizarre scenes that sometimes give it a surreal feeling. In one scene, a poor black farmer recounts in embarrassing detail how he came to impregnate his own daughter. In another scene, the narrator is forced to fight blindfolded against dozens of other black men to entertain a white audience, as a prerequisite to earning a college scholarship.

But Invisible Man is also filled with a very real, very poignant story about a young man trying to achieve success. He is thwarted because of the color of his skin; but also, because the system is stacked against anyone who tries to follow their own path.

He summarizes his position, as follows:
"I was pulled this way and that for longer than I can remember. And my problem was that I always tried to go in everyone's way but my own. I have also been called one thing and then another while no one really wished to hear what I called myself. So, after years of trying to adopt the opinions of others I finally rebelled. I am an invisible man."

To some extent, we all face a battle between success and invisibility; balancing our own goals with the goals of society. It is hard enough for those born into a position of privilege. But even harder for a black man living in 20th century America.