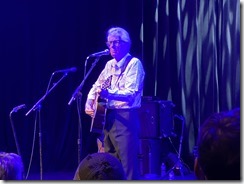 In early 2019, the COVID pandemic interrupted the tour of Nick Lowe and Los Straitjackets, or as Lowe described it: "It was a forced layoff." They recently returned to the road, but only for two weeks, concluding the brief tour Saturday night at Park West.

Other than a brief flash in the late 1970s, Lowe never achieved broad commercial success. But he is known in the music industry as an outstanding songwriter and producer and at 72, his baritone vocals sound as good as ever.

He delighted the packed auditorium, opening with three upbeat rockers ("So It Goes", "Ragin' Eyes", and "Without Love") before slowing things down with the melancholy "Lately I've Let Things Slide", a song that seemed appropriate for those of us struggling with isolation these past two years.

Los Straitjackets were an excellent backing band, staying mostly out of Lowe's spotlight, despite sporting Luchador masks, making them look like Mexican wrestlers in dark suits. Lowe stepped offstage for about 15 minutes mid-concert to allow Los Straitjackets to perform some of the surfer-rock- influenced instrumentals for which they are best known.

Lowe returned to the stage to complete the set, finishing with a rousing version of his classic "I Knew the Bride (When She Used to Rock 'n' Roll)".

It was an outstanding show. Nick Lowe has not missed a step in the years he has been touring. I last saw him in a solo performance 14 years ago at a small club in Michigan. He was great then; he was great when I first discovered him in my high school years; and he was great Saturday night at Park West.