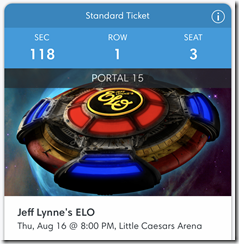 It has been a long time.

Electric Light Orchestra had not played a concert in Detroit in 37 years. And it has been about the same amount of time since an ELO single cracked the US top 40.

But despite peaking in the studio in the 1970s, enough 50-something rock fans remembered them with enough fondness to pack Little Caesars Arena Thursday night in Detroit.

Only Jeff Lynne remains from the ELO of their heyday; but Lynne was always the face of the band, as the lead singer, songwriter, and producer of most of their songs and albums. At age 70, Lynne looks the same as he did decades ago, his aging face hiding behind long brown curls, a beard, and dark glasses, just as it did during the band's heyday. His voice is still strong, although he delegated some of the lead vocals to another singer.

I made the trek to Detroit from Chicago in large part to reunite with some old high school friends and enjoy a night of memories.

Mr. Lynne did not disappoint. Known for pop melodies over complex arrangements, he brought with him a string section and 4 keyboardists to accompany his rock band and backing vocalists. 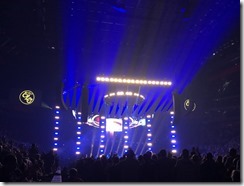 The set list was strong on the hits of the late 70s. For about 90 minutes, he played songs like "Evil Woman", "Do Ya", "Rockaria", and "Sweet Talkin' Woman" took me back to my high school and junior high school days. The acoustics were surprisingly good for a hockey arena and the sellout crowd responded to each memory the band played. He even played "Handle With Care" from his days with the Traveling Wilburys supergroup, delighting the audience with videos of him recording with Tom Petty, Roy Orbison, George Harrison, and Bob Dylan. ELO closed the set with some of their biggest hits: "Don't Bring Me Down", "Turn to Stone", and "Mr. Blue Sky". They were gone from the stage for barely a minute before returning to play an extended version of Chuck Berry's "Roll Over Beethoven".

For me, it was a chance to reconnect with my past. Old memories, old friends, old songs, and my old home town made Thursday night a special memory.