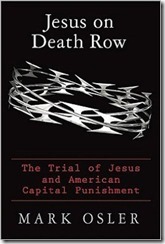 The story of Christianity is the story of Jesus Christ – his birth, his life, his trials, his death, his message, and his resurrection.

In Jesus on Death Row, Mark Osler walks us through the biblical story of Jesus's trial, conviction, and execution; and compares it to the criminal justice system in the United States of today.

Osler draws upon the 4 Gospels for the details of Jesus's trial; and upon his own experience as a prosecutor (he is now a law professor) for analogous stories in today's legal system.

The similarities are often striking.

Many practices of Jesus's time persist today. Prosecutors still rely on paid informants to bolster their case as the Pharisees famously paid 30 silver coins to Judas Iscariot; the appeal process of today, although slower, is not unlike the process that Jesus went through as he was brought before the Jewish Elders, Pontius Pilate, and Herod; Arrests today are often made when a suspect is vulnerable and unprotected, which is how Jesus was arrested at night in the garden.

There are differences, of course. Crucifixion was an extremely painful way to die and would not pass today's ban against cruel and unusual punishment.

Osler discusses the last meal of prisoners, which is probably the death row event with which average people can most easily identify. He notes that Jesus's last supper the night before his execution was well documented in the gospels and is a key event in Christian history.

Jesus on Death Row leaves the reader with a sense of uneasiness about the death penalty, which is a final and irrevocable sentence - particularly as we see it applied to Jesus Christ, who was guilty of no violent crime. This undercurrent isn't surprising as Professor Osler spends part of his time fighting for the rights of inmates on death row.

I found the book fascinating. I've read the Gospels, but not with an eye toward the legal aspects and how they compare with today's law. "Jesus on Death Row" gave me a new perspective on an old and familiar topic.