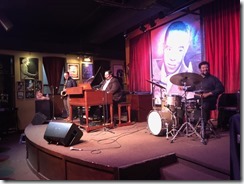 Jazz musicians are famous for playing the notes around the melody, adding their own interpretation of a tune. But the tremolo of Joey DeFrancesco's organ does much of that for him.

the Joey DeFrancesco Trio brought played a delightful set Sunday night at the Jazz Showcase in Chicago's South Loop. Most songs began with a mellow feel, then increased in energy until each was swinging and/or rocking.

Like most great band leaders, DeFrancesco knows to find and showcase great musicians. In this trio, it was saxophonist Victor North, whose solos captivated the audience. Drummer Khary Shahee was solid throughout and seemed determined to play every solo with his eyes closed. 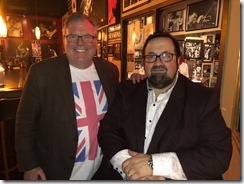 The Trio played a mix of originals ("Blues in Three", "Trip Mode") and arrangements of other composers tunes, including an extended version of Cole Porter's classic "Night and Day".  One highlight was the beautiful melody of "Easy to Remember" and the final song of the night – an up-tempo, frenzied piece in which each member of the band tried to outperform one another in turn.

It wasn't a long set - maybe 75 minutes - and the second set was canceled due to low ticket sales; but those who came out saw an excellent performance.