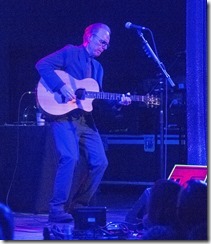 I love that John Hiatt seems to love performing.

Hiatt is not known for recording hit songs. Bonnie Raitt, Joe Cocker, Three Dog Night and many other artists have reached the charts with covers of his songs.

But Wednesday night at the City Winery, he was on stage performing his own songs to a full house with a smile on his face. 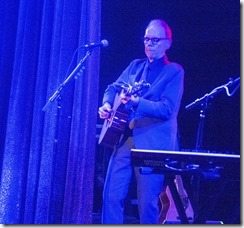 He didn't have a backing band; He didn't need one. Hiatt accompanied himself on guitar and (sometimes) keyboards and sounded as he sang. His voice still sounds good and still maintains that midwestern twang; and, if he struggles to hit high notes, he does so with passion.

The Indianapolis-born troubadour performed for about 100 minutes and seemed to gain strength and energy as the night went on.

With dozens of albums and hundreds of songs in his catalog, he had plenty to choose from and we heard some of his best, including "Thing Called Love", "Crossing Muddy Waters", "Have a Little Faith in Me" and "Lift Up Every Stone".

He returned to the stage to sing "Memphis in the Meantime" as an encore to a standing ovation.