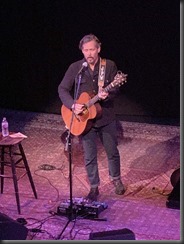 Can one be happy listening to sad songs all evening? John Paul White proved that one can when he performed Friday night at the Old Town School of Folk Music in Lincoln Square.

His career has spanned over a decade and he has released solo albums, as well as those from Civil Wars - his Grammy-winning collaboration with Joy Williams.

But on this night, he focused on his solo songs, which he performed accompanied only by himself on guitar. And, of course, he focused on his sad songs from "The Hurting Kind" to "The Once and Future Queen", and "My Dreams Have All Come True", a song about a man whose dream of a painful breakup turns into reality.

At one point, he reassured the audience: "In case you're wondering, I'm ok", explaining that he wrote his best sad songs when he was happy.

White's voice has great pitch and range, reminiscent of Roy Orbison and some of the best Country & Western singers. His songs challenge that voice and it rose to that challenge.

The opening act was also a delightful surprise. I was unfamiliar with Parker Millsap, but his excellent songwriting, voice, and guitar picking won me over.

White's show was appreciated by an audience familiar with his music. In addition to his own songs, he played a handful of covers, including Electric Light Orchestra's "I Can't Get Her Out of My Head" with which he closed the evening.

It was a sad evening. But it made us happy.