"Journey to the Center of the Earth" by Jules Verne 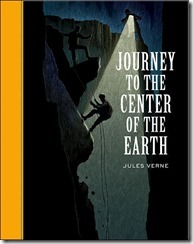 It was 1864 and not much was known about the interior of the Earth. But that did not stop Jules Verne from writing an adventure story about 3 explorers, on a quest to reach the Earth's center.

Verne took what he knew about geology and combined it with his own fertile imagination to create "Voyage au centre de la Terre", which has been translated into English as Journey to the Center of the Earth.

The story is told in the first person by Axel, a young German, whose uncle - the brilliant and eccentric Professor Lidenbrock - discovers an encoded message written centuries earlier. The message describes a volcano in Iceland with underground passages that lead to the Earth's center. So, the uncle and his reluctant nephew set out for Iceland and, along with their guide Hans, descend into the bowels of the Earth in an attempt to reach the center.

The story takes a while to get going, as the men prepare for their adventure and travel to Iceland; but once they descend into the volcano, they encounter wild creatures and monstrous vegetation and violent weather and many other dangers. The second half of the novel is a thrill ride.

I like how detailed Verne is about the world his explorers encounter and how rational he is about their explanations. Of course, he was limited by the existing scientific knowledge of the 19th century; but he does well within these limits. Although many of the "scientific" points of the story are now known to be false, Verne creates a believable story by providing plausible explanations - mostly through the mouth of professor Lidenbrock - for what the party experiences.

For some inexplicable reason, my translation changed the names of the main characters from Professor Lidenbrock and Axel to Professor Hardwegg and Harry.

But this did not diminish Journey to the Center of the Earth for me. It is a grand adventure story that I enjoyed as a teenager and enjoyed again today.