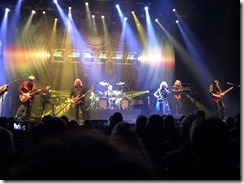 Sometimes, I will hear a song and it will take me back to the time I first heard it - to the friends I was with and where we were and what we were doing and what I was feeling. A familiar song can bring happy memories and sad memories flooding back.

When I listen to the progressive rock band Kansas's "Leftoverture" and "Point of Know Return” albums, I'm transported to my high school days. I bought these 2 albums within months of each other and they were among the first of couple dozen albums of the thousands I eventually ended up buying.

Saturday night at the Genesee Theatre in Waukegan, IL, I felt I was surrounded by kindred spirits. The heads covered in gray hair (or lacking hair) suggested a crowd that also lived their youth in the 1970s. And the fact that so many gave a standing ovation after every song suggested that the memories invoked by the song were as important as the current performance of the song.

After 5 decades, only 2 founding members of Kansas remain - guitarist Rich Williams and drummer Phil Erhart. But the current members still respect the old songs and performed them very well. Original lead vocalist Steve Walsh is gone, but Chicago native and former truck driver Ronnie Platt sounded a heck of a lot like him; and David Ragsdale played an excellent electric violin, reminiscent of original violinist Robby Steinhardt, who gave Kansas its distinctive sound during their late 70s peak. 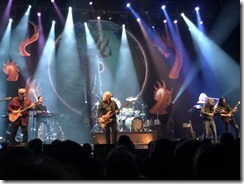 At Genesee, they played over half of "Leftoverture", including "Miracles Out of Nowhere" (my personal favourite) and "Carry on Wayward Son" (the evening's encore).

But the main draw of the performance was their "Point of Know Return", which the band played in its entirety. Hearing the tracks in order was like sitting in my parents’ basement with the stereo turned up loud while I pored over the lyrics, liner notes, and cover art. I was transported.

As were all the old folks around me.