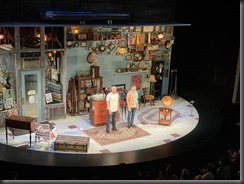 American men are funny. So many of us like sports and talk about sports and even build friendships primarily on the basis of our shared love of a game or a team.

Rajiv Joseph's play "King James" follows two Cleveland Cavaliers basketball fans, who meet during LeBron James's rookie season. The city of Cleveland has not won a championship in over 50 years and sports fans are energized by the possibility of James - a generational talent drafted by the Cavaliers - changing that. Shawn (Glenn Davis) and Matt (Chris Perfetti) bond over their fandom and become best friends. So much of their friendship is based on their love of basketball and the Cavs. They debate, celebrate, and mourn as LeBron's career and decisions impact the team and its fans.

But the play is not about sports and the expectations that fans have of their athletic heroes.

But ultimately, sports was a red herring; it was nothing more than a reason to bring together the two friends. "King James" is more about relationships and friendships and how people understand one another and communicate. I saw myself in both Shawn and Matt and I felt their struggles. It was a bromantic comedy that even a bro would enjoy.

I left with a feeling of hope - hope that Cleveland sports fans must have felt following the 2016 NBA Finals.