"Lord of the Flies" by William Golding 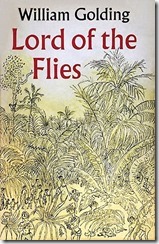 What would happen if a plane crashed on a deserted island and the only survivors were a group of English schoolboys?

Would they form their own society?

Would they establish rules by which to govern themselves?

Would they be kind to one another?

William Golding describes this scenario in his 1954 novel Lord of the Flies.

It is a dark story.

After their plane crashes, killing all adults on board, the boys attempt to self-govern, but quickly devolve into savagery. The stronger boys seize power and bully the weaker ones.

Golding uses the boys on the island as a microcosm of society. Without the rule of law to govern them, the strongest take over and exert their way upon the weaker ones.

Not one of the boys is over 12 years old, but it is easy to forget this as they grow more violent and emotion overrides reason and groupthink overrules logic.

A power struggle takes place between Ralph, who tries to establish order and a set of rules to help the boys survive and increase their chance of rescue; and Jack, who appeals to their emotions and plays on their fear of an alleged monstrous beast on the island.

As their makeshift society collapses, they begin to worship the head of a pig swarming with flies (their "Lord of the flies") and even robbery and murder is no longer taboo to some of them.

I read this parable 20 years ago and again this week - and I loved it. Golding paints a dark picture of the chaos that results when rules are not enforced. We see ourselves in these young boys and it is not the best part of ourselves.