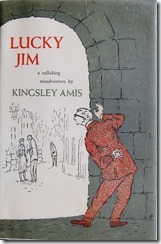 He is petty and shallow; he is unqualified for his job; he is lazy and judgmental and sexist; he makes faces at people behind their back; and he is a drunk.

And he is miserable. Miserable because he is trapped in a job that he dislikes working for people he doesn't respect and he is convinced he will be fired soon. Almost everyone in his life is pretentious or boring or neurotic or arrogant. And most of them are trying to bully or manipulate him.

He is the title character of Kingsley Amis's first novel: Lucky Jim.

Lucky Jim is a farcical story filled with failure and petty revenge and self-destruction. But Amis's wit succeeds in making it enjoyable for the reader and even getting us to cheer for the novel's anti-hero.

The book is filled with excellent prose, like the following description of Jim's feelings the morning after a night of hard drinking.

"He lay sprawled, too wicked to move, spewed up like a broken spider-crab on the tarry shingle of morning. The light did him harm, but not as much as looking at things did; he resolved, having done it once, never to move his eyeballs again. A dusty thudding in his head made the scene before him beat like a pulse. His mouth had been used as a latrine by some small creature of the night, and then as its mausoleum. During the night, too, he’d somehow been on a cross-country run and then been expertly beaten up by secret police. He felt bad."

Read this silly book to laugh with and about an underdog, who somehow makes good, despite his best attempts not to do so.