Lucky to see "The Luckiest" 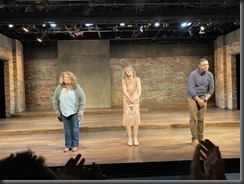 "The Luckiest" is the story of two best friends - one of whom is dying. Lissette is diagnosed with an incurable degenerative disease that will leave her unable to control her muscles until she dies of suffocation. Peter is her friend, who tries to support her and is sometimes successful. Lissette's overbearing and loving mother is the only other character in the play.

A trio of actors, along with director Cody Estle brought Melissa Ross's play to The Raven Theatre, where I saw Friday evening's performance.

Christopher Wayland and Tara Mallen are excellent as Lissette's friend and mother, respectively; but it is Cassidy Slaughter-Mason who steals the show with an emotional performance as Lissette. She quickly and tastefully changes from able-bodied to disabled in this show - a necessity, as the story is told non-linearly. The Raven is small enough that audience members can clearly see Ms. Slaughter-Mason crying real tears during several emotional scenes.

I am old enough to have lost people I love. Some went quickly and some lingered slowly. I am fortunate to have had the time to say goodbye to some of them. Some faced their death with fear and some with courage, but most with a combination of the two. This play captured that mix of feelings among the dying and among those close to the dying. We each deal with tragedy in our own way, whether it is for ourselves or for those we love.