Lukas Nelson and Promise of the Real Rock The Vic 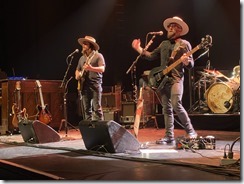 Lukas Nelson strode onto the Vic Theatre stage, smiled at the audience, and announced "Hi, I'm Lukas Nelson; and this is Promise of the Real!" He seemed genuinely excited to be there performing in front of a sold-out audience  September 30. The band quickly launched into the kinetic song "Start to Go", quickly followed by "Perennial Bloom" - a song from his new album which was released just a few months ago.

Nelson's enthusiasm did not wane throughout the evening. He raced from song to song, sometimes switching from rock to ballad, sometimes pausing briefly to swap guitars or switch to the piano, but always with an eye toward keeping the music flowing. He managed to engage the audience while doing so, focusing his attention outward to those on the main floor and balcony, rather than inward toward himself, his instrument, and his band.

The energy was not exclusive to the lead singer. Bassist Corey McCormick had a bounce in his step that he maintained as he kept a mean rhythm on the multiple bass guitars he played and as he sometimes danced with Lukas. Logan Metz kept busy moving between steel guitar, piano, electric keyboard, and harmonica; while drummer Anthony LoGerfo could be seen singing along to every song, despite the absence of a microphone.

POTR played a few more songs from their recent release, which contains an impressive collection of music. A classical piano solo led into "More Than We Can Handle" - another impressive new song; and "Leave 'em Behind" was an emotional song about a woman encouraged to escape an abusive relationship (a true story about his friend, according to Nelson.)

They also drew from the rest of their 7-album catalog released over the past 11 years. "Start to Go", "Perennial Bloom", "Fool Me Once", and "Carolina" were all crowd-pleasers. 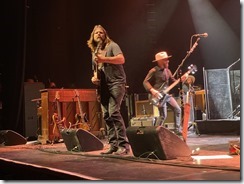 Nelson was sentimental in his delivery of "Just Outside of Austin" and "Forget About Georgia" - two songs of the opposite sides of a young person falling in love, but turned cynical with "Four Letter Word", told from the point of view of a husband growing tired of his wife two years into their marriage. Other highlights included "Start to Go", "Perennial Bloom", "Fool me Once", and "Carolina".

For the encore, bassist McCormick returned to the stage first for an impressive solo before the rest of the band joined him and played for another half hour.

Nelson has a long way to go to match the songwriting legacy of his father - legendary country star Willie Nelson. But he has a solid start with six studio albums and songwriting credit in the recent "A Star is Born" remake. He is a solid composer and brings enthusiasm and charm when he performs live. He and his band have also established a place in the music industry by recording and touring as Neil Young's backing band.

Lukas retains much of his father's charm and adds a charm that makes him a joy to watch perform.