"M is for Magic" by Neil Gaiman 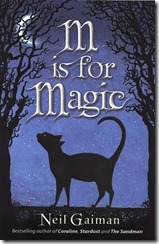 The title is a tribute to Ray Bradbury's short story anthologies R Is for Rocket and S Is for Space and Gaiman's style is not dissimilar to Bradbury's.

The collection opens with "The Case of the Four and Twenty Blackbirds" - A detective story in the style of Dashiell Hammett's or Raymond Chandler's pulp novels, but featuring characters from nursery rhymes. Hard-boiled private eye Jack Horner attempts to solve the mystery of whether Humpty Dumpty fell from a wall or was pushed. The story is often laugh-out-loud funny.

10 more stories and a poem follow; they cover various subjects and styles, but revolve around the genres of fantasy, horror, and science fiction. These tales were written by Gaiman over a period spanning over 20 years. Many of them have appeared in other collections, but they were all new to me.

My favourite was "Chivalry", which tells of an old lady who buys the Holy Grail in a local thrift store for 70 pence and likes the way it looks on her mantle. When Sir Galahad arrives on his quest for the Grail, he offers her priceless treasures in exchange; but she really likes the way it looks between a ceramic figurine and a photo of her late husband.

Most of the stories are a bit scary, but none is terrifying. There is a bit of nudity and sex, so I would not recommend M is for Magic for young children. But teenagers and young adults will enjoy Gaiman's wit and creativity; And grown-ups like me will also like it.

The Case of the Four and Twenty Blackbirds

A young boy stumbles upon a giant troll, who declares he will eat the boy's life. The boy dissuades the troll by promising to return when he has experienced more life.

A mysterious and malevolent jack-o-lantern frightens the family

How to Sell the Ponti Bridge

An elaborate scam that impresses other grifters

October in the Chair

An old lady discovers the Holy Grail in a secondhand shop. A few days later, Sir Galahad comes to her house on his holy quest.

The devil shows up and battles an adopted stray cat

How to Talk to Girls at Parties

A poem about what to do if you find yourself in a fairy tale.