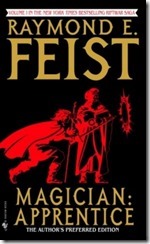 Pug is an orphan on the Midkemia world. He is apprenticed to the wizard Kulgan, learns a bit of magic, saves a princess, and is granted a lordship. Then a war breaks out between the people of his homeworld of Midkemia    and the Tsurani of Kelewan, who travel to his world through a "rift" in space.

"Magician: Apprentice" Tells the story of Pug, of his friend Tomas, who receives a magic gift from a dying dragon, and of the war between the invading Tsurani and the people of Midkemia. The stories are straightforward tales of high fantasy, in the tradition of Lord of the Rings, but simpler. Major themes are Pug's coming of age and the contrasting cultures of the two warring societies.

I enjoyed reading it, but found the book unsatisfying by itself.  This book and "Magician: Master" were originally published as a single volume titled simply "Magician". Following the success of "Magician", Feist expanded the story and released it as two separate novels. But it the two together form a single story and Book 1 does not hold up well on its own. To appreciate the story, you must read both volumes.

Still, it is a good start to a good story and it is well told.