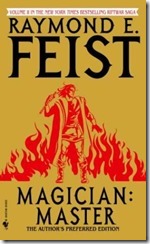 A warning: You are much more likely to enjoy Raymond Feist's "Magician: Master", if you first read his novel "Magician: Apprentice". This story was originally published as a single volume, titled simply "Magician"; but after the success of this novel, Feist convinced his publisher to allow him to expand the story into 2 books and release those separately. As a result, neither book stands well on its own, but together they form a solid story.

"Magician: Master" continues the story of Pug, who was captured by the Tsurani of Kelewan during the Riftwar and sold into slavery before rising to power via his magical abilities. He ultimately returns to his home world of Midkemia in attempt to gain a truce; but he is confounded by evil forces and by a senile king.

This book and its predecessor hold up well as a high fantasy novel. Numerous characters are developed and cross paths through multiple subplots.

The greatest weakness of the story is Feist's tendency to skip significant events, then relay them later in retrospect. A character dies, but we don't hear of it until his girlfriend relays the news;  Pug transforms into a master magician, but we have very little insight into how this happens; he goes away and somehow is more powerful than his teachers when he returns. Showing the reader these actions would almost certainly have more impact than telling us about their results.

Despite its weaknesses, I enjoyed the 2-volume story and I have already begun reading the next book in the series.