Matt Maeson: The Best Musician I Never Heard Of 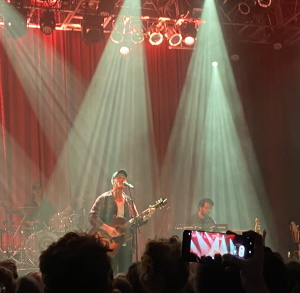 Matt Maeson is the best musician I never heard of. My friend Christina introduced me to his music, which she loved enough to fly from Las Vegas to Chicago to see him perform for two nights at the House of Blues. I joined her for the Friday evening performance, and I was more than impressed.

Maeson has a loyal following, as indicated by his success on the alternative music charts and by the number of fans who packed the venue and sang along to his songs.

Many of his songs lend themselves to group singing with their anthem-like quality, such as "Blood Runs Red", "Cut Deep", and "Cringe". But even his slower tunes like "Hallucinogenics" and "Beggars Song" (his encore) inspired audience participation.

Matt was raised by missionaries who used music to connect with their audience. You can hear influences from rock, Christian music, and gospel in his music. He brings the passion of an evangelist to his live performance.

I am happy he has moved from the unknown to the known in my mind. Thank you, Christina.