Max Weinberg's Jukebox Lets the Audience in on the Fun 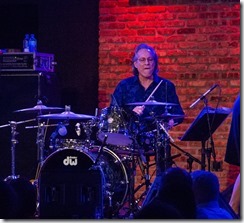 A jukebox (for those too young to remember) was a machine filled with black vinyl discs - each containing a different song. They could be found in a lot of bars and diners and patrons could insert one or more coins and select the songs they wanted to hear.

Max Weinberg's Jukebox works on the same principle. A screen next to the stage continuously scrolled a list of almost 200 songs and Max periodically went into the audience to ask what people wanted to hear. And then he and his band played those requests.

Weinberg (for those too young to remember) rose to fame as the drummer of Bruce Springsteen's legendary E Street Band; and later led Conan O'Brien's house band for both the Late Show and the Tonight Show.

Max Weinberg opened his City Winery show Friday evening with Cream's "White Room" and Tom Petty's "American Girl" before soliciting requests from the audience. Anything on the scrolling list was fair game and the list was packed with classic rock favourites from The Beatles, The Who, The Stones, Springsteen (of course), and a host of others. Max played the drums and was accompanied by 2 guitarists and a bass player - each of which took turns singing lead.

In 2+ hours, I counted 26 songs performed by the band, including "Lola", "Drift Away", and "Me and Julio" - each delivered with tight playing, high-quality musicianship and great enthusiasm.

It was like listening to a really good bar cover band with one famous guy in it.

They closed the night with a trio of high-energy Springsteen songs: "Pink Cadillac", "Dancing in the Dark", and "Glory Days". For the final song, Max invited audience members to join the band onstage.

A great concert (for those too young to remember) happens when both the audience and the performers enjoy themselves. This was one of those evenings.