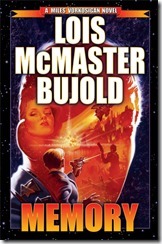 In Mirror Dance, Lord Miles Vorkosigan was killed (or nearly-killed) in battle; then revived through the cryogenic technology of the future universe in which he lives.

Memory – the next novel chronologically in the Vorkosigan series - opens with the consequences of that resurrection. During a rescue operation, Miles has a seizure – a side effect of his revival treatments - which results in a serious injury to the target of his rescue. Miles increases his problems by lying about the incident in his report to his superior - Simon Illyan, which results in his discharge from both the Barryaran military and the mercenary band he led covertly under his Admiral Naismith alias.

Shortly afterward, Illyan suffers a mental breakdown and Miles suspects treachery. Miles has lost his military standing but gains an appointment from the Emperor to investigate.

Then, the detective story begins.

This is one of Bujold's stronger Vorkosigan novels.

It is a transition novel for Miles, the protagonist of this series, as he copes with the shattering of his dreams and transitions into post-military life. By doing so, Bujold sets up the characters to proceed in a new direction in this and future novels.

She explores themes of loyalty and duty in the face of weakness. Miles's relationship with those around him is complex - he is headstrong and often clashes with authority and with those who have injured him. But he grants respect even to those with whom he clashes. And his relationship with Illyan is especially well done.

And she introduces a subplot with the Emperor seeking a bride to be his Empress.

Memory is mostly a detective story. But the human elements and the evolution of familiar characters make it much more than this.