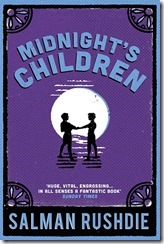 Saleem Sinai was born at the stroke of midnight on the day that India declared independence from Great Britain. 1,001 Indian children were born within an hour of midnight August 15, 1947 and each of them were gifted with some special power. Saleem's power of reading minds and communicating telepathically manifested itself when he was 10 years old.

In Salman Rushdie's Midnight's Children, Saleem tells the story of his life and his family. His parents and grandparents grew up in an age of colonial rule, but Saleem grew up with his country. Significant events in Saleem's life coincide with significant events in India's history. He and his country experience growing pains together. He is conflicted by the different aspects of his personality just as the new nation experiences the difficulty of coordinating the needs of countless cultures.

It is a complex novel with dozens of characters introduced in its 500+ pages.

The narrator (Saleem) often switches between relating his story in the first person and writing about himself in the third person.
He is quick to switch between the present tense and the past tense and the past imperfect tense; while recounting an incident, he will suddenly digress and recount a significant bit of family history; or he will hint about something yet to happen, promising to relay that story later.
He tells the story to his fiancée Padma. Occasionally, the author looks up from his narration and tells her (and us) what he is thinking at that moment or what is going on outside his window.  It is as if he is writing down the story as it occurs to him, rather than in any natural order.  His stream-of-consciousness narration reads more like an oral history than a novel.

Rushdie addresses love and fidelity and struggles for power and the dangers of centralized authority.

Despite the supernatural ability of many of the characters, Rushdie provides a sense of realism - even bringing in some historically significant characters in India's history.

But the accuracy is not as important as the story and the characters and the way Rushdie weaves together multiple plots and fulfills prophecies and promises - sometimes long after they are made.