"Mirror Dance" by Lois McMaster Bujold is the sequel to "Brothers In Arms", the novel that introduced Miles Vorkosigan's clone / brother Mark. 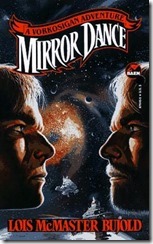 Following Miles's rescue of Mark in the previous novel, the brothers return to Miles's home planet of Barrayar, where Mark decides to launch a rescue mission to liberate clones who are intended to be used as replacement parts for their genetic donors. Miles follows and is gravely wounded in the ensuing battle. His body is cryogenically frozen and then disappears. Mark returns to Barrayar to deliver the news to their parents - Lord Aral and Lady Cordelia. Arel and Cordelia  accept Mark as their son and a potential heir to the Vorkosigan line. Ultimately, Mark launches another rescue mission, this one to find and save Miles, who has been revived by scientists on an enemy planet.

This is one of Bujold's strongest novels. She not only tells a complex story, but she dives further into the emotions of her characters - particularly the clone Mark.

The definition of humanity and the rights that go with it are common themes of Bujold's books and this one delves into it very well, if a little heavy-handed. Interwoven with this general question is Mark’s personal struggle to define his own identity. He desperately wants to define himself outside of just the clone of a heroic Lord. But, his struggle to do so often leads to failure. Others help him with the struggle. He was raised to assassinate Miles's father, but ends up being accepted by his potential victim and his new family.