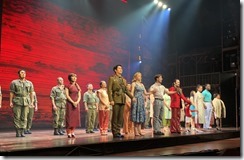 Not only did I fail to see "Miss Saigon" in the 20 years since its premier in London's West End, I failed to learn anything about the show. I didn't know who wrote it, I haven't heard a song, and I did not know the plot. I didn't even know that it is an adaptation of Puccini’s "Madame Butterfly" opera.

That all changed Thursday night at the Wharton Enter in East Lansing, MI. My niece and I braved a hail storm and flooded streets to grab second-row tickets to see a touring company as it passed through mid-Michigan.

To spoil it for those of you who did as little research as I did: Miss Saigon tells the story of Chris, an American G.I., who falls in love with Kim, a young Vietnamese girl during the Vietnam War. When Saigon falls to the Viet Cong, Chris escapes, but Kim does not. It's a tragic story of war and lost love and what might have been.

The performance at Wharton was wonderful,

Emily Bautista and Anthony Festa moved our hearts as the star-crossed lover.

But the show was stolen by "The Engineer" - a sleazy night club / brothel host/manager, who manipulates Kim and other women, but somehow gains some sympathy from the audience. I believe Thursday night's performance featured understudy Eymard Cabling, rather than the regular Red Concepcion in this role. Regardless, he played the character flawlessly.

Another scene-stealer was the micro-urchin who played Kim's son Tam. He had no lines, but he overwhelmed us with is cuteness every time he stepped on stage.

I didn't hear any hit songs, but he music of "Miss Saigon" always satisfied. Song flowed into song so frequently that there were fewer opportunities to applaud than most shows afford. There were no low points in a lovely musical score, which was carried well by the cast.

The stage setting was very impressive for a small-city touring company. The highlight was a helicopter that loomed over the U.S. Consulate in Saigon to rescue the last of the refugees before the city's fall. One could almost smell the diesel coming off this impressive effect.

The final scene left the audience in tears.

Our attendance was a late decision, but this was an evening very well spent and one I will remember for a long time. It was well worth a trek through the hail and floods.