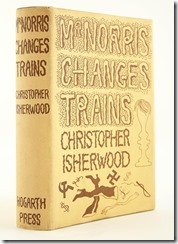 On a train heading to Berlin, two English expatriates strike up a conversation that later evolves into a friendship. William Bradshaw and Arthur Norris spend many days and evenings together over the coming months - dining out, visiting at home, and patronizing a local brothel.

Norris is the title character of Christopher Isherwood's 1935 novel Mr. Norris Changes Trains, which was published as The Last of Mr. Norris in the United States.

Norris is eccentric and charming and there is something untrustworthy about him. He is broke but leads an extravagant lifestyle; he claims to be in the "import-export" business but is vague about what exactly he imports and exports; and his wealth is suddenly increased after a mysterious business trip to Paris. Norris is also vain (he regularly wears makeup and a wig); and a sexual deviant (he pays a prostitute to beat and humiliate him); He has a combative relationship with his servant Schmidt and the two spar frequently and hold one another in contempt.

Norris's many flaws complicate his life, but they do not discourage William's friendship.

Isherwood paints a picture of 1930s as the Weimar Republic comes to an end and the Nazis and Communists vie for power. He brings together an interesting set of characters, most of whom seem to be insincere and dishonest. William (a surrogate for the author) narrates the novel, but interjects very little of himself into the story, which focuses on Mr. Norris and his flaws.

There isn't a lot of action in this book; but the characters and the dialogue make it worthwhile. We see the frivolity of high society and we see relationships damaged and repaired and we see the political conflicts in the days before the rise of Hitler and the start of the Second World War.

When Norris persuades William to help him with a mysterious business venture, his dishonesty is exposed.

In his later years, Isherwood dismissed this novel as too shallow. I don't dismiss it. It works well for its length and Isherwood can be forgiven for not predicting the Nazi atrocities when he wrote this story in the 1930s; and for not revealing his own sexuality in the narrator.

Mr. Norris Changes Trains is not a classic but is a good story with good characters.