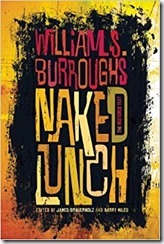 Naked Lunch by William S. Burroughs is a difficult book to read and to understand. I'm still not sure I do.

The book consists of a series of descriptions of the visions seen while high on heroine, morphine, or some derivative thereof. Many of the visions consist of deviant sexual fantasies, including sadomasochistic scenarios so extreme that they lead to murder and suicide.

Burroughs was one of the most famous writers of the influential "Beat Generation", although he never approached the fame and success of his friends Allen Ginsberg and Jack Kerouac

Burroughs spent much of his adult life in a drugged-out haze and many of the visions told here are based on his own experiences. "Naked Lunch” written largely in a drug-induced haze, which may have increase Burroughs's creativity; but it clearly pushed him toward a very confused story.

Shortly after its publication, Naked Lunch was banned as pornography in Massachusetts.

I disagree with attempts to ban this book; but I fail to see its value as a classic. It is a non-linear narrative with no discernable plot or story. Apparently, several of the characters are the same character with different pseudonyms. But I don't know how anyone could figure that out without being told. As a result, it is far less compelling than other non-linear classics, such as Joseph Heller's excellent Catch-22.

I will give the book the credit it deserves for one thing: The great rock/jazz band Steely Dan took their name from a brand of sex devices described in Naked Lunch.