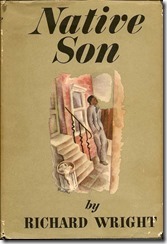 Bigger Thomas was scared, and he was angry. He had reasons to be scared and angry. He was a 20-year-old black man living in the ghetto of segregated 1930s Chicago.

In Bigger's new job as a chauffeur for businessman / philanthropist Henry Dalton, he was told to give a ride to Dalton's radical daughter Mary. Mary and her Communist boyfriend went out of their way to show kindness to Bigger, which only angered him more.

24 hours later, Bigger had killed two women - one accidentally and the other to protect himself.

There are no heroes in Richard Wright's 1940 novel Native Son.

The protagonist is decidedly unsympathetic and in no way likable. Bigger is a bully, he is self-absorbed, and he is an unrepentant criminal. He spends most of the book rationalizing his terrible actions. He was quick to anger and quick to turn to violence and he blamed all his problems on others, even physically attacking his friends when it suited him. At one point, he tried to frame an innocent man for his crime. His own weaknesses make him angry; But he directs that anger toward others and punishes everyone around him. He is amoral and self-unaware and he has been that way most of his life.

But Wright reminds us that society must shoulder a share of the blame for Bigger's fate. Economic and educational opportunities are denied to the young negro and to all his people, because of the color of their skin.

The kindly Mr. Dalton gives money to black charities and treats the black people he meets with kindness and respect; but he owns apartment buildings across the city and he refuses to rent white neighborhood apartments to black tenants and he charges higher rents in the black neighborhoods.

Others exploit Bigger's crimes to their own agenda. The right-wing racists point to Bigger as an example of the danger of allowing too much freedom to blacks; the left-wing Communists point to his situation as the product of an unfair social and economic system. Each side uses the case to amplify their own agenda.

The police and the press pile more charges on top of the ones to which he confesses. Of course, they treat the killing of a rich white girl as far more serious than the murder of a poor black girl.

Although this story took place over 80 years ago, much of the segregation and polarization still exists. And though the vast majority of blacks never turn to the extreme violence of Bigger Thomas, many still feel the pressures of a system that is often oppressive.

Bigger is a tragic figure - alone and isolated, he cannot connect with society or with his family or even with other blacks. He lashes out in the only way he knows.

His violence serves as a warning to us all.