The Sandman debuted in his own DC Comics title in 1989 and was moved to DC's Vertigo brand a few years later. Gaiman penned the first 75 issues over a 5-year span.

The story begins in 19th century England as a group of amateur sorcerers attempt to trap Death, but mistakenly capture Dream instead. After a century of imprisonment, Dream manages to escape and return to his dominion. 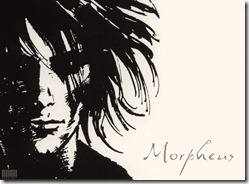 Dream (a.k.a.. Morpheus, a.k.a. The Sandman) is one of The Endless - a family of god-like beings, each with control over a specific dominion. His siblings include Death, Destiny, Delirium, Despair, Desire, and Destruction. Dream is as much human as god and shows many of the weaknesses of a human, similar to the pagan deities of ancient Greece or Rome.

Although we saw very little of the DC superheroes in the pages of The Sandman, many character's from the horror and macabre titles of that universe were featured. Cain and Abel of The House of Mystery and The  House of Secrets respectively made frequent appearances.

Gaiman introduces us to a host of new characters that populate and interact with the Dream World. But he also sets the series firmly in the DC universe by brining in established characters. Mainstream super heroes, such as Batman and Superman make brief cameos; but we see much more of the alternative and macabre DC personas. For example, we learn that the House of Mystery and the House of Secrets (and their caretakers - Cain and Abel, respectively) are located in the Dream World. And Dream's brother Destiny is the same Destiny who narrated Weird Mystery Tales and Secrets of Haunted House. Other pre-existing characters in this series include Etrigan the Demon, John Constantine, Doctor Destiny, Mister Miracle, and The Fury. We also get brief appearances by Golden Age Sandman Wesley Dodds and the bizarre Jack Kirby Sandman of the '70's. Even a teenage US President named Prez - an obscure character from a 4-issue run in the mid-1970s is referenced in the story.

The stories are dark, but entertaining. They require more focus than most comics, given the complexity. Storylines may take a year or more to resolve, while other subplots unfold.

Some might be turned off by the artwork, which tends toward more abstract and sketchy; but this fits the dark mood of the series.

A few years ago, DC released a set of 10 paperbacks that include Sandman #1-75. Rather than making each volume of equal length, DC chose to keep related stories together, so that subplots are introduced and resolved in the same volume. This is how I read the series and I would recommend others do the same.

I loved the mythology of the story and I loved the humanness of it. We see Gaiman evolve as a writer over the course of the 5 years he wrote the series. If you are a Neil Gaiman fan or a fan of dark fantasy comics, I recommend this series.