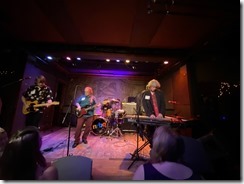 When a band records for over 50 years, it is easy to miss some of their output. I've been a fan of NRBQ for decades and I've listened to many of their songs; but I still did not recognize most of the songs they performed Sunday night at Fitzgerald's in Berwyn, IL.

The band treated the audience to a few cover songs, such as The Beach Boys' "Darlin'" and Clarence "Frogman" Henry's "Ain't Got No Home", as well as a few familiar songs I recognized from their extensive catalog, including "Green Lights", "Ridin' in my Car", "Howard Johnson's Got His Ho-Jo Workin'", and "RC Cola and a Moon Pie". They played two sets, plus an encore that included two classics: "Captain Lou" - a tribute to the late Lou Albano, a retired professional wrestler who once served as the band's manager; and their excellent cover of the Johnny Cash-penned "Get Rhythm".

During the past five decades, NRBQ has suffered through deaths and major illnesses, and the departure of key members; but founding member Terry Adams has kept the group going by recruiting capable musicians to accompany him as he plays keyboards. Together they maintain the energy that made this quartet a favourite live performer for so many years, despite never having a single crack the Top 40. Adams's energetic keyboard playing was a focal point on stage, but bassist Casey McDonough, guitarist Scott Ligon, and drummer John Perrin were each excellent. They don't look like rock & roll stars, but they sound and perform like they are.

The only low point of the evening came when Adams decided to sing a goofy song about a jealous ex-wife. The lyrics were slightly misogynistic, and he had to read them from a paper. This could have and should have been skipped. But that was a brief speed bump in a rapid frenzy that was the evening's music.

Over two hours of rock & roll, blues, and rockabilly was enough to satisfy the crowd and bring some fun to Berwyn.