"Odd and the Frost Giants" by Neil Gaiman 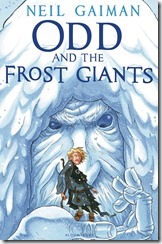 Neil Gaiman knows how to tell a story. And Odd and the Frost Giants is no exception.

Odd was a crippled Norse boy in the age of the Vikings. Odd's father was dead, and his mother had re-married a neglectful man. One day, Odd rescued a bear and was followed home by the beast, along with an eagle and a fox. The three creatures turned out to be the gods Thor, Odin, and Loki transformed by an evil frost giant and cast out of Asgard, as part of a plot to steal Thor's hammer Mjolnir and to kidnap the beautiful goddess Freya.

Odd and the trio set out for Asgard to rescue Mjolnir and Freya.

This is a short, but delightful book - not only for its story and its characters - but for Gaiman's prose. One can imagine him sitting around a campfire and relaying the tale to a circle of Vikings who listen in wonder. As a bonus, each chapter features a beautiful ink drawing by Brett Helquist. Readers of "A Series of Unfortunate Events" will know his work; but, in this book, each drawing has the look of a woodcut, giving it a distinctly Nordic feel.

Odd and the Frost Giants is targeted at school-age children, but I am well into my 50s and I enjoyed it.