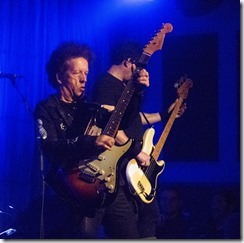 "I love quality" announced Willie Nile from the stage to the audience at SPACE in Evanston Friday night. And quality is what he delivered. From his 90-minute set to his excellent band (I was impressed by his new lead guitarist Jimmy Bones) to his charming demeanor to the warmup band (Georgia singer/songwriter Brad Ray, accompanied by his father).

If you don't know Willie Nile, you are not alone. He has carved out a successful career, recording a dozen studio albums that satisfied his fan base; but he has never cracked the top 40.

His music is old school rock and roll with cerebral lyrics. Think of Lou Reed crossed with Bruce Springsteen, crossed with the Clash. 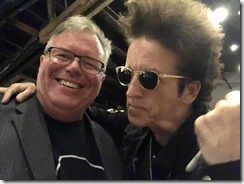 With decades of material on which to draw, Nile had many quality choices. And he delighted the crowd with rockers like "House of a Thousand Guitars" and "All Dressed Up and No Place to Go", along with thoughtful slow songs like "The Innocent Ones", which he dedicated to the Kurds fighting for their lives in the middle east. For "The Streets of New York", he set aside is guitar and sat at the piano.

The band closed with a rousing rendition of "One Guitar" in which they were joined by Brad Ray and his dad).

Willie Nile stands about 5-foot-nothing and has sported a Cosmo Kramer haircut since years before there was a Cosmo Kramer. But Friday night in Evanston, he cranked out house rocking music a hundred feet tall.

And everything he did was filled with quality.