Outlander, the first novel by American author Diana Gabaldon, was originally published in 1991. It has since inspired 7 sequels (so far), a TV series, and a graphic novel. 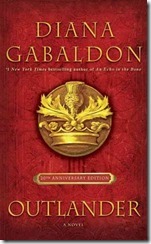 The story focuses on Claire, a World War II combat nurse. The war kept Claire and her husband Frank apart; so, when it ended, they traveled to Inverness, Scotland for a second honeymoon and to allow Frank to research his ancestors.

While in Scotland, Claire encounters an ancient Druid shrine that magically transports her to the mid-18th century. Almost immediately after entering the past, Claire is attacked by the sadistic British Captain Jack Randall. It turns out that Randall is the direct ancestor of Claire's 20th century husband. She is rescued by Scottish clansmen and caught in the struggle between the English army and the Scottish clans.

Although often classified as a science fiction novel (I first learned of Outlander on NPR's Top 100 Science Fiction & Fantasy Books, this book is primarily an historical romance. The time travel incident serves mostly as a MacGuffin to thrust together Claire and Jamie.

Despite Claire's 20th century marriage, she falls in love with Jamie Fraser, the handsome, rugged Scottish warrior. Their marriage is initial one of convenience (Claire can escape English arrest by becoming a Scottish citizen), but a passion soon ignites between the two and the subsequent sex scenes are frequent and racy enough to make a Scotsman blush.

Outlander is not for everyone. Some readers will take issue with the patriarchal nature of 18th century marriages - particularly a scene where Jamie beats his wife for disobeying him and Claire is quick to forgive him. Others may be turned off by a prolonged description of male-on-male rape and torture near the end of the book.

But if you can get past these, it is a pretty good story. And enough readers think so that Gabaldon continues to extend this series today.