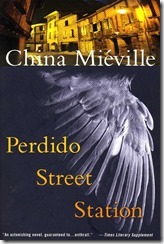 Perdido Street Station is an enormous train station in the city of New Crobuzon in the world of Bas-Lag. It is also the title of China Miéville's novel about the the station, the city, and the world.

The problems of industrialized societies in our world are magnified a hundred times in the city state of New Crobuzon: Pollution, Poverty, Political corruption, an Inequitable distribution of wealth and power, and Racial division make this place a miserable home for nearly all who dwell in it.

The races of Bas-Lag are not simply people of different skin tones and nose shapes; they are a bizarre assortment of creatures - mostly humanoid, but some not. We see bird-men (Garuda), intelligent plants (Cactacae), aquatic humanoids (Grindylow), parasites shaped like disembodied hands that grasp the throats of their victims (Handlingers), humans with the head of a beetle (Khepri), and sentient machines (Constructs), among others.

A common form of punishment in New Crobuzon is to surgically alter people by attaching mechanical or organic body parts to their bodies, creating a separate race of "Remades" and further increasing the collection of creatures found in this world.

Creatures from other dimensions also sometimes visit Bas-Lag, such as The Weaver a giant spider-like creature, who seeks to add his own version of order to the world. In this novel, Hell is a tangible place that sends an official Ambassador to New Crobuzon.

Isaac is a scientist living and working in New Crobuzon. He is in love with the Lin - a Khepri artist who is estranged from her own people. One day the Garuda Yagharek approaches Isaac asking him to restore to him the power of flight. Yagharek's wings were removed by his tribe as punishment for an unidentified crime. Isaac accepts and begins by studying the biology of hundreds of flying creatures. His studies inadvertently unleash the Slake-Moths - deadly, interdimensional creatures with the power to hypnotize their prey before devouring their consciousness.

The slake-moths terrorize the city, leaving behind mindless shells of people wherever they attack. The government and numerous vigilante groups are unable to stop the slake-moths, so Isaac - feeling responsible - organizes a group of warriors to hunt them down and destroy them.

This world is powered by magic and by technology. But it's an old technology. Blimps are the most common form of air transportation and computers are programmed via punch cards. These punch-card-programs are powerful enough to make some computers self-aware.

I loved the moral ambiguity of this story. Our heroes often must make difficult choices - such as sacrificing the lives of innocent bystanders - in an effort to stop the monsters terrorizing the city.

I loved the complexity of the plot. Most storylines are not resolved until the very end and many are not happy resolutions.

I loved Miéville's attention to detail. We can see the massive bulk of the weaver as he fades into our dimension; we feel the terror inspired by the slake-moths.

The reader experiences the feeling of dread that hangs over the protagonists. Miéville gives us a real sense of the despair felt by so many in this awful world he created. Citizens live in a police state, controlled by a secret militia, controlled by the mayor and a few powerful businessmen.

Perdido Street Station is a fantasy story, a steampunk story, a horror story, a monster story, an adventure story, a detective story, a cyberpunk story, and a love story. Some have described it as Weird Fantasy in the tradition of H.P. Lovecraft and some of the pulp writers of the 1930s.

However, you choose to classify it, Perdido Street Station is one of the most imaginative stories I've read in years.