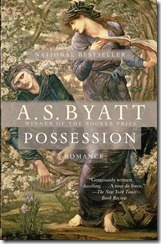 Possession by A.S. Byatt is not a straightforward tale. It tells of an affair between Victorian-era poets Randolph Ash and Christabel LaMotte.

But the romance is revealed largely through letters and journals and essays and poems written by Ash and LaMotte and those around them; and it is slowly uncovered by present-day scholars Roland Michell and Maud Bailey - whose own romance is growing.

Near the beginning of the novel, I questioned the frequent context switching between the present and the mid-19th century. I wondered why we should bother with the present-day characters. But, as the book progressed, the two stories became more intertwined. I began to enjoy the historical discoveries, as Roland and Maud made them; I appreciated the ethical dilemmas Byatt presented of learning about the past, while respecting the privacy of the dead; and I was intrigued by the academic rivalries, as others heard of these discoveries and raced to uncover details more quickly.

I enjoyed Byatt's poetry, which she attributed to her fictional authors/lovers. Byatt does a good job of giving different voices to the writings of each character, including the styles of their poetry.

I really liked the ending, which revealed much about the lives of Randolph and Christabel, much of which was never discovered by Roland, Maud, and their contemporaries.

Possession is a good book for fans of poetry, detective stories, and historical romances.