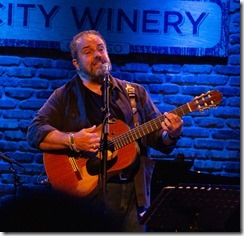 It has been 30 years since The Mavericks released their first album. When the band broke up in 2003, founder and lead singer Raul Malo launched a solo career. The Mavericks reunited ten years later, but Malo continues to tour on his own. Friday evening at Chicago's City Winery, Malo stood on stage alone and entertained a full house for over two hours, armed only with a guitar bearing the scratches of countless concerts. The piano behind him puzzled me because he only played two songs on it; but I enjoyed them as did the rest of the audience, so who am I to judge?

The Mavericks are also touring, which could tire some performers, but Malo showed no signs of wear. His beautiful tenor voice seamlessly switched keys and he never missed a note or an emotion.

He played a mixture of Mavericks songs and his own songs and even a few covers of others' songs. To demonstrate that songwriters are great thieves, he sang several bars of standards, such as "Blue Moon" and "You Send Me" without changing the guitar part of his own song. At one point, he began a rendition of Neil Young's "Harvest Moon" before abandoning it in the middle after messing up the lyrics. "At least you know it's live," he quipped.

Many of his songs were sung in Spanish (Raul is a Cuban-American whose parents emigrated from Cuba), and many came from The Mavericks' recent "En Español" album.


It has been a long time since I've seen an entertainer who combines such a heavenly voice with such engaging charm between songs. He radiated excitement about being back on stage after the long isolation of the pandemic. The audience responded with their own joy.

I had tickets to see Raul 10 years ago in Michigan, but a business trip prevented me from attending that show. He was worth the wait.