"Ready Player One" by Ernest Cline 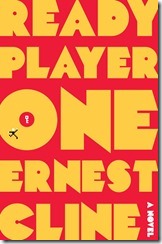 Energy sources are depleted; cities are so overcrowded that people live in trailers stacked on top of other trailers; the economy is collapsing; and the police and media are controlled by a giant, evil corporation.

It's even tougher on Wade, an awkward teenage orphan living in a trailer stack in Oklahoma City. Wade, like most people in 2045, escapes harsh reality by spending most of his time in the Oasis - a virtual reality world with its own social structure and economy, created by the computer genius James Halliday. In the Oasis, Wade assumes the identity of Parzival and leaves his real-world problems behind.

When Halliday dies, his will promises his entire fortune (hundreds of billions of dollars) to the first person who can solve an elaborate scavenger hunt with clues left in the Oasis. Wade/Parzival devotes himself to finding the keys, gates, and egg in order to win the game. With so much at stake, just about everyone on Earth does the same. Including the evil multinational corporation IOI, which will stop at nothing to win.

Along his quest, Parzival is joined by friends that he knows only through their online Avatars.

Many of the game's clues are references to the pop-culture of the 1970s and 1980s that Halliday loved. As a result, the book is filled with references to books, video games, comics and movies from that era.

Ready Player One isn't perfect. Sometimes the list of nostalgia reads like product placement, rather than an attempt to build the culture or advance the story.

The book calls attention to social problems that exist today and, if left unchecked, may result in the dystopian future described therein. But it ignores the fact that the Oasis - a seeming Utopia created by the benevolent and altruistic Halliday - does nothing to address these problems. If anything, it makes the world worse by convincing everyone to spend their time in the virtual world, rather than working on re-building the real one. Halliday's contest intensifies this imbalance, leaving one to wonder if anyone is spending any time repairing roads, providing medical care, or extinguishing fires.

But, if you ignore this glaring weakness, the novel is great fun. Especially if you were a young nerd in the 1980s.