Back-stabbing (both literal and figurative)? Check. 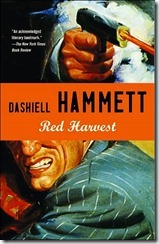 These elements are cliché in the noir genre of film and books. But, in 1929, when Dashiell Hammett published Red Harvest, the genre was in its infancy. It was Hammett's success that led others to copy these elements so much that they became clichés.

The unnamed narrator - a private investigator from San Francisco is called to meet with a newspaper publisher in the small town of Personville. Personville is so infiltrated with mob corruption that many people call it "Poisonville". This nickname is reinforced when the publisher is murdered before the narrator meets with him.

The narrator (often referred to as "The Continental Op", because he is an operative for the Continental Detective Agency) is then hired by the murdered publisher's father Elihu Willsson, the most powerful man in town to investigate his son's murder; then to clean the town of corruption. When the Op solves the murder, Willsson tells him to forget about cleaning up the town, but the Op decides to do it anyway.

He does so by setting the rival mobs against one another and the corrupt police force.

As a detective story, Red Harvest does not offer much. Many of the crimes are solved when someone confesses. But as an action story, it is remarkable. Dozens of people are killed in the gang war. And as a study in character, it holds up well. We never know quite what motivates The Op to continue his quest to clean up the town. He is nearly framed for murder for his troubles.

Although Red Harvest falls short of being a classic, its influence on literature and film noir cannot be ignored. And it is a fun read.