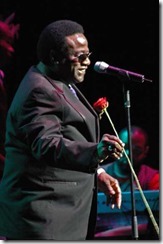 A pile of roses sat on a table far at stage left.

The band entered the stage and played a few minutes of a funky groove before Al Green walked out and picked up a handful of flowers and handed or tossed them to ladies in the audience. He repeated this gesture multiple times during his  performance.

This was an appropriate beginning to Green's performance. He did not as much perform for the audience as he charmed them. And, for the most part, they were delighted to be charmed.

It was Green's first tour in seven years and his stop in Chicago Tuesday night was a popular one.

The audience sang along to songs that were never pop hits. But, when he played some of his most popular songs ("Let's Stay Together", "Here I Am", "Tired of Being Alone", "I'm Still In Love With You"), everyone rose to their feet in appreciation.

I remember these songs as soulful melodies, delivered at a slowburn pace. But Green's band (9 instrumentalists + 3 backing vocalists) increased the tempo, delivering each one a little funkier than the original.

Green played mostly R&B and soul, but mixed in a bit of Gospel music. Al Green is an ordained minister with his own church in Memphis and he moved us with his rendition of "Amazing Grace". A medley of songs by the Temptations ("My Girl"), the Four Tops ("Sugar Pie, Honey Bunch"), and Otis Redding ("Dock of the Bay") pleased the audience.

The band closed with a rousing rendition of "Love and Happiness".

At 73, Rev. Green is a few years older, a little thicker in the waist, and lacks some of the energy he possessed during his popularity of the 1970s and 1980s. His performance lasted only about an hour and did not include an encore; but he still can hit the high notes that made him famous; and he still projects joy while singing the songs that brought joy to so many of us during our youth.