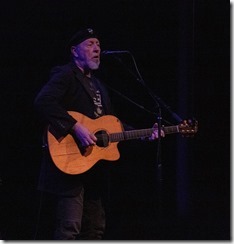 I have been listening to Richard Thompson for decades, but I was in no way prepared for seeing him in concert. But see him I did, as a few tickets popped up hours before a Saturday night show that had been sold out for months. It was good luck for me, as I had bought tickets to see The Wallflowers that same night and an illness in the band forced that show's cancellation.

But sitting in the second row at the Old Town School of Folk Music, I was able to get close to the singer/songwriter/guitarist, who made every effort to relate to his audience. He chatted between songs and joked with the crowd. Thompson published a memoir - "Beeswing: Losing my Way and Finding my Voice, 1967-1975" last year and he read a few passages from it, each time leading into a song.

Hearing the richness of Thompson's baritone voice was a pleasure and watching as he accompanied himself on guitar was impressive. His live performance far exceeds what is captured on his recordings. At age 72, he has lost none of his vocal prowess nor his playing dexterity.

For most of the show, Richard was alone on stage, accompanying himself on guitar; but for a few songs, he invited singer Zara Phillips to sing harmony on the chorus. Phillips's pleasant voice enhanced each song in which she participated.

Thompson sang songs from throughout his career. He included songs from Fairport Convention ("Who Knows Where the Time Goes?", "Poor Will and the Jolly Hangman"), from albums recorded with his ex-wife Linda ("Walking on a Wire", "Down Where the Drunkards Roll"), and songs from his solo career, most notably the crowd favourite "1952 Vincent Black Lightning".

Richard Thompson rose to prominence in the 1960s when his band Fairport Convention helped to launch the folk music scene. He left FC in 1971 and has been recording and touring in the years since, but he has never sought nor achieved the commercial success that his talent deserves.

The couple sitting next to me told me had seen this singer dozens of times and still enjoyed his shows.